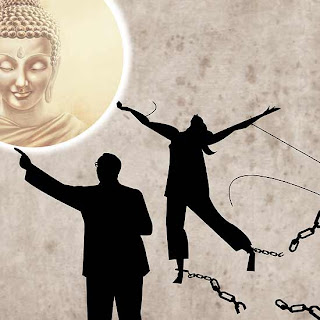 The recent controversy over the cartoon of Babasaheb Ambedkar sitting on a snail and Pandit Nehru whipping it from behind, indicating that Ambedkar had made the process of making the Constitution slow, whereas Nehru was for hastening it, created a massive ruckus in Parliament, cutting across all political parties. The cartoon, drawn by P. Shankar Pillai in 1949, was brought into an NCERT political science school textbook in 2006. The reaction of Dalits to the inclusion of the cartoon in the textbook has been amazingly uniform: they have seen it as a deliberate undermining of Ambedkar’s stature; they have seen it as trivialising their prophet. For them, he is not just a Constitution-maker, as he is to Hindu intellectuals.
A bit of context here is useful. In the recent past, any attempt, howsoever small, to desecrate Ambedkar’s statues in any part of the country—there are thousands across India—has led to a riot-like situation. This has not been witnessed even in the case of statues of leaders like Mahatma Gandhi and Jawaharlal Nehru because they are seen just as great leaders—and nothing more—by their ardent followers. Being mostly Hindus, their gods are elsewhere. However, for a large number of Dalits, Gautam Buddha is God and Ambedkar is a prophet who established a spiritual relationship between the Buddha and them (Two other comparable, but more established, prophets are Jesus and Mohammed). For many insensitive, upper-caste intellectuals, he is just a leader or an intellectual, a lesser mortal than Gandhi. For consultants to the National Council for Educational Research & Training (NCERT) like Yogendra Yadav and Suhas Palshikar, he is a lesser mortal than even Lohia (they are Lohiaites).
How and why did Ambedkar cross the stage of a mere leader and intellectual in the mind of Dalits? How did he acquire the status and stature of a prophet? As in the case of the old Arab tribes, the Dalits of India were godless untouchables—exploited, worshipping local idols, living in oppression and superstition—at the time Ambedkar arrived on the socio-political scene of India. If Prophet Mohammed introduced the abstract Allah to self-destructive tribes, Ambedkar introduced Buddha to soulless Dalits.
Rama and Krishna, who were seen and referred to as gods by Hindu nationalist leaders, were never seen as the liberators and saviours of Dalits. Though Jesus and Mohammed used the politics of liberation and salvation, their organisation remained spiritual. On the other hand, Ambedkar worked as a leader and as an intellectual, wrote volumes, among which is the Constitution of India, but finally realised that religion is the source of liberation here and salvation hereafter. He created a new religion—Navayana Buddhism. Through this process, he even liberated Buddha from imprisonment in the Dashavatar. Unlike the other prophets, Ambedkar never performed miracles, but his birth, growth, education, and finally his pitting of Buddhism against Hinduism itself appear miraculous.
If Jesus giving spiritual water to a Samaritan woman in exchange for well water is a miracle, if Mohammed civilising the Arab tribes is a miracle, Ambedkar reviving Buddhism as the answer to iniquitous Hinduism is a miracle. Nehru—like some other intellectuals—thought Ambedkar’s Buddha and Dhamma would be an innocuous book. But that book is attaining the stature of Buddhism’s holy book. Gandhi and Nehru now remain upper-caste heroes and agents of the state, whereas Ambedkar is a prophet of the poorest of the poor—the Dalits. The difference between a prophet and a leader is that a prophet becomes a living hope of liberation and salvation of the poorest of the poor. That is what Buddha, Jesus and Mohammed are. They always stood by the poorest of the poor. They too never peeped into the houses of the rich and the exploiters. Ambedkar did the same.
Ambedkar infused soul into a soulless people. As Buddhists, they now walk with their head high. In drawing his cartoon, Shankar could not even imagine this. He was just an upper-caste man living off fun pictures. That is okay with Gandhi and Nehru. That funny game cannot be played with prophets who changed the lives of poor people, who were hitherto never allowed to be human beings. Yes, prophets too play politics. But their politics is meant to liberate the oppressed. Ambedkar did that without any compromise at any stage of his life.
(The writer is former head of political science at Osmania University, Hyderabad. He is also the author of Why I am Not a Hindu.)